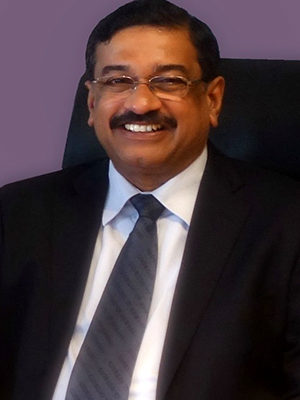 He has been a recipient of the ‘PADMA SHRI’ National Award from the Former President, His Excellency Late Dr. A.P.J Abdul Kalam, Government of India in recognition of his distinguished and exceptional service in the field of Medicine in 2006.

He has also been a recipient of the prestigious award from Medical Council of India ‘DR. B.C.ROY AWARD FOR THE YEAR 2008’ for the development of specialties in different branches in medicine from The President of India, His Excellency Shri. Pranab Mukherjee in 2016.

He was also awarded the prestigious ‘Indo-Australian Award’ for Meritorious Service by the Indo-Australian Association, and ‘For the sake of Honor Award’ by Rotary club of Madras Esplanade in 2006. He was the recipient of ‘Award for Excellence of Service’ in appreciation of contribution to Pioneering Cochlear Implant Program in Srilanka, by the President of Srilanka, in 2006, ‘Award for Service’ from Vidya Jyothi Sir Arthur C. Clarke, Srilanka in 2006 and Conferred ‘Award for Excellence’ in appreciation of outstanding contribution towards the Cochlear Implant Group of India, by His Excellency, the Governor of Kerala, in 2006. He was awarded the ‘Shri Shyam Lal Saxena Memorial Award 2005-2006’ by the National Academy of Medical Sciences for the best-published work in the field of bio-medical engineering by bio-medical scientists. He is the only Indian to be elected as a Member of the Governing Body-Asia-Pacific Cochlear Implant Board, in 2007. He was conferred the prestigious ‘Tamilnadu Scientist Award-2007’ by the Tamil Nadu State Council for Science and Technology, Government of Tamil Nadu in 2008 and was also conferred Two – ‘Doctor of Science (Honoris–Causa)’ awards by The Tamilnadu Dr. MGR Medical University in 2008 and Saveetha University in 2013. He has been elected as Member, Executive Board, International Federation of Otorhinolaryngological Societies (IFOS), Brazil & has been elected Board Member of the Politzer Society Inc.- The International Society for Otologic and Science held at London in 2009. He was the President of Asia Pacific Symposium on Cochlear Implants and its related science (APSCI). He was conferred the ‘Best Doctor Award’ in 2011 and ‘Scroll of Honour’ in 2012 by The Tamil Nadu Dr. M.G.R.Medical University. He was nominated as ‘Goodwill Ambassador for India’ from the Academy at 2013 Global Health Symposium at the AAO-HNSF Annual Meeting & OTO EXPO in Vancouver, Sept – Oct 2, 2013. Honored for the ‘Dedicated Services’ at the Upgraded Institute of Otorhinolaryngology, Madras Medical College, Chennai, October 2013. He received the ‘Appreciation Award’ for Excellent Organization of AOICON 2011 at the 66th Annual Conference of the Association of Otolaryngologists of India AOICON 2014, Mysore, January 2014. First Indian Otologist to appointed as a Visiting Professor in Otology 2015 by Journal of Laryngology & Otology (JLO) and Royal Society of Medicine, United Kingdom. He was conferred Honorary Fellow of Indian Academy of Otorhinolaryngology, Head and Neck Surgery in August 2016. He received the ‘Lifetime Achievement Award’ at the 10th SAARC ENT Conference conducted at Dhaka, Bangladesh in November 2016.

He is one of the pioneers of Cochlear Implant Surgery in India and has Mentored and was responsible for starting Cochlear Implant surgery in 32 centers in India, and in 7 centers overseas including Sri Lanka, Armed Forces Hospital in Bangladesh, Nigeria & Nepal. He is the FIRST Surgeon in South and South East Asia to have performed the Auditory Brainstem Implant and the FIRST Pediatric Brainstem Implant in Asia, January 2009. He Mentored and was responsible to start Auditory Brainstem Implant surgery in Apollo Hospital Bangalore. He is also the FIRST surgeon in Asia Pacific region to have performed the Totally Implantable Hearing Device surgery. He is also the recipient of ‘Outstanding Leadership Award’ in recognition of his ‘Pioneering spirit in the field of Cochlear Implants’ at the 1st World Congress on Cochlear Implants in Emerging countries’ Dubai, 2016.

He graduated from Madras Medical College in 1978 with distinction and obtained his DLO and MS in 1981 from the same Institution. He received several Gold Medals including the Chipperfield Gold Medal for Surgery and Dr. P.V. Cherian Gold Medal for the best outgoing MS student in the University.

He has Edited a text book on ENT Diseases in a Tropical Environment & two operative manuals – one on Temporal Bone Surgery and the other on Skull Base Surgery. He is in the Editorial Board of several International & National Journals. He has written a FOREWORD in the American Journal of Otolaryngology, Head & Neck Medicine and Surgery.

He has over 125 publications in major National & International journals and has attended & presented papers in almost 450 National and International conferences and has been an invited lecturer in several of them. He has conducted & attended almost 300 workshops on Temporal Bone Surgery, Skull Base Surgery, Live Laser surgery and Audiology for Surgeons etc. He has conducted almost 210 Free ENT camps and has visited over 45 countries for various academic and professional meetings. He has delivered almost 80 Orations in major conferences. He is the only Indian to have been invited to give Guest Oration at the 12th British Academy Conference in Otolaryngology, United Kingdom in 2006 and has also been invited to give Instructional courses in World Congress of Otolaryngology, Sao Paulo and the American Academy of Otolaryngology & Head and Neck Surgery 2009. He has been an Examiner in ENT for several Universities in the country and abroad.

He is a very simple and self-effacing human being with a deep empathy for the under privileged and a strong social commitment. In short, he is an embodiment of a dynamic surgeon, brilliant academician, great leader, good teacher and an emulation and inspiration for everyone to follow